It’s Not Getting Warmer – Again, Really?

It’s Not Getting Warmer – Again, Really?

I woke this morning to an email from a friend wanting to know more about an article in the Daily Mail, stating that global warming stopped 16 years ago. This, of course, came as something of a surprise since to my counting there have been more than 330 months since the last month that the globe was below the 20th century average temperature, and the past 12 years have seen most of the warmest temperatures since 1860 (Rood, Just Temperature). So what’s going on?

For my regular readers, I refer back to my piece Form of Argument on how to analyze this news report. I will start there, then I will lay out some of the observational basis for why global warming did not “stop” 16 years ago.

The first accounting of this report that I saw was on the website New American. In their words, “ … The New American forthrightly acknowledges an editorial point of view.” They are owned by the John Birch Society. I make these statements so that you can consider that the information in that article supports a point of view that is stated to support a specific political philosophy. In this New American article it states that the Met Office had quietly released a report and gave this link to that report.

Following that link, one finds this is not actually a “report,” but the previously promised release of the HadCRUT4 data set. From that site, “HadCRUT4 is a gridded dataset of global historical surface temperature anomalies relative to a 1961-1990 reference period.” There are a number of diagnostic figures that are released with the data set. I can find nothing in the Met Office release that claims that global warming has “stopped.”

In the original Daily Mail article it is stated that the Met Office report, “…was issued quietly on the internet, without any media fanfare, and, until today, it has not been reported.” Given the online release of data as the fundamental report, this suggests that the Daily Mail reporter is the one responsible for the conclusion that “the world stopped getting warmer almost 16 years ago …” Any debate that has followed from the release of the HadCRUT4 data set and this interpretation by a reporter seems to have been initiated by the Daily Mail article. The original article then goes on with a series of quotes, that are, in fact, not directly related to release of the data set or to the question of whether or not the Earth has “stopped warming.”

If I return to my piece Form of Argument, the article in the Daily Mail relies on a single data set, which is surface air temperature, and it does not discuss this data set in relation to many other data sets that complete the story about whether or not the planet is warming. The article also works to generate emotional controversy by providing quotes from two scientists who would “not normally be expected to agree,” suggesting “unreliability” of models, using words such as “catastrophists” to characterize scientists who warn of the risks of global warming. Add to this that the article does not seem to be a journalist reporting on a scientific report, but a journalist making a casual point, as if it were science-derived, about a particular data set in a way to support a particular point of view. All told, this article fits all of the criteria of a prejudicial form of argument directed only at making someone believe the person making the argument; it is not seeking knowledge-based understanding.

Now let’s think about the temperature data. I am sure that many people in the land of blog will rise to critical comment on the article in the Daily Mail. Here is how I would quickly frame the argument.

Looking at the recent temperature and variability, there is nothing in the recent observations that suggests that the behavior of the temperature data has changed in any significant way. We have the normal amount of bumps and wiggles. (Rood series on Bumps and Wiggles, that last time people were talking about it “not warming.”) If we were to calculate, rigorously, a trend in the entire data set, then it would be strongly upward. If we were to pick, say, 16 year time periods out of the dataset and calculate 16-year trends, we could find just about any “trend” that we might want.

Second: To rely only on surface air temperature does not provide a complete measure of the warming of the Earth (Rood, Just Temperature). Much of the heat goes into the ocean, raising the temperature of the ocean (Rood, Still following the heat). A recent paper in Physics Letters A, entitled “Comment on ‘Ocean heat content and Earthʼs radiation imbalance. II. Relation to climate shifts’” by Dana Nuccitelli and others comment on the practice of 1) focusing on interannual variability and 2) focusing on isolated data sets in making statements about whether or not the Earth is warming. The carry away figure from that paper is shown here 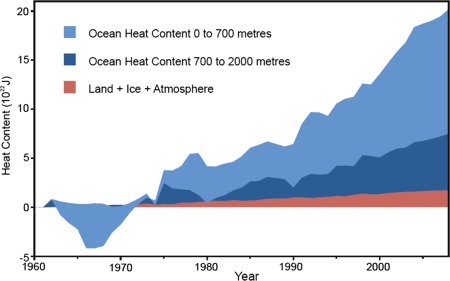 
When considering the heat content of the Earth, rather than the surface temperature of the air, there is no evidence that the rate of heating of the Earth has slowed in the past decade. The paper further shows that a focus on short-term variability, as done in The Daily Mail article, brings focus to what is statistically “noise” and leads to spurious artifacts in the determination of recent trends.

These results from Dana Nuccitelli and others are detailed on the web site Skeptical Science. (blog link, paper link ) A key difference between this analysis and reportage in the Daily Mail is the detail of method and the review required for publication in Physics Letters A.

Third: Here is another consideration of the Earth’s climate beyond simply considering the air temperature as representative of “climate.” In the Presidential Debate on October 16, 2012, a question was asked of Governor Romney how he is different from George W. Bush. Part of his answer was how different the times are today than they were a decade ago. The massive loss of sea ice in the northern hemisphere in this decade is another signal of the warming Earth. It is different from any other decade in the HadCRUT4 time series. This melting of ice requires the use of heat from the air and from the ocean. The heating of ice and water means that not all of the heating of the Earth shows up as a signal in the air. A flattening in the air temperature might mean melting of the ice.

Finally: What about the air temperature, has it peaked or flattened out? No. Consistent and persistent readers of blogs on Wunderground.com know that if we look at air temperature, then we see a trend and on top of this trend are up and down fluctuations that are related to weather. We see many types of internal variability – the bumps and wiggles (once again, the link). If we look at the climate as a whole, the oceans, ice, land, and atmosphere, then the atmosphere bounces around a lot more than the oceans and the ice. The atmosphere responds most strongly to the seasonal cycle of the Sun, and the atmosphere responds to small changes in the ocean with big changes. So why do I say that the air temperature has not peaked? Compared to a balanced state, we have an excess of energy at the Earth’s surface (see here). This energy will ultimately lead to warming of the atmosphere, as well as the ocean and ice and land. It is reasonable to expect the air temperature to continue to warm. How long does it take for that warming to appear in the air temperature record? A reasonable expectation is in 10 – 50 years. I fully expect the air temperature for the decade of 2011 to 2020 to be warmer than 2001 to 2010, which was the warmest decade that we have measured (see also Some Jobs for Models and Modelers).