Thank you for the responses about online courses from the last blog. In addition to the blog comments, I got some emails. I welcome more comments and emails.

Some years ago I went to Agate Fossil Beds National Monument in Western Nebraska. There are amazing fossil sites all over the Great Plains, from dinosaurs to mammoths. Though we never see the two together. Wonder why?

Sticking to the subject, as in many of the National Park Service’s (NPS) facilities, there is educational material. Large mammals dominate the fossils at Agate Fossil Beds. There is a stunning heap of bones collected in a steep-sided pit that was once water, then mud and then large bones. I am personally a fan of the beardog. The evidence is that persistent drought led to drying of the surface sources of water. Eventually, all that was left were the deeper pools of water. The migrating animals collected at the pools. The large carnivores found easy hunting and were, surely, in carnivore euphoria for a while. All kept chasing the water, getting stuck in the mud, falling and piling on top of each other. This all happened about 20 million years ago. (Some NPS links: One, Two)

So California. There are millions of people and highly productive farms. California has a large enough economy that is often heralded as important on national and world stages. The precipitation in California occurs mostly in different parts of the state than where the people live. The rain and snow that occurs in the Sierra Nevada are of special importance. This water feeds the rivers and fills the reservoir. The seasonal melting of the water stored in snowpack and small glaciers provides water for the rivers and reservoirs during summer, when the normal amount of rainfall is very small. California is especially fortunate that the water in the Sierra Nevada is mostly in the state, which eliminates the need to negotiate with other states over water.

There are two points that I want to make here. First, water in California is strongly influenced by agreements that are codified in policy, law and regulations. Second, water availability is dependent on water management, which relies on engineered systems of dams, ditches, canals and aqueducts. For the people and the farms in California, the weather and climate that matter are at a distance.

I, also, want to make a little summary here, California has it all. There is high population; there is economic success; there is need for energy. These are three elements of our existence that are entangled with climate, and therefore, climate change. Then, on a more concrete level, California’s relationship with climate relies on human agreements and human engineering.

There are many news stories about the ongoing drought in California and the impacts on farms, cities and forests. One that caught my eye was in the LA Times, entitled Drought Yields Only Desperation. The article is by Diana Marcum, and she has many articles reported from the ground in the Central Valley. This well-written article is a narrative about field workers on the west side of the San Joaquin Valley. From a climate perspective, the narrative shows the vulnerability of people at many economic levels, through many businesses and professions. This part of the Central Valley, which includes Fresno and Stockton, was badly hit by the recession in the past five years. This demonstrates the connection between climate and economy, with climate stress and economic stress becoming amplifiers of each other. The human cost increases.

There is another place from which California gets water in significant amounts – under the ground. The number of reports on ground water pumping is growing. In the News section of National Geographic.com there have been ongoing articles. If You Think the Water Crisis Can't Get Worse, Wait Until the Aquifers Are Drained, posted on August 19, 2014, maintains that many aquifers are being depleted in an unsustainable way. The drought in California and the West, more generally, has accelerated the pumping. From a Californian point of view, the aquifers in California and in the Colorado River Basin are both being depleted. The numbers being reported are that, in the drought, 60% of California’s water comes from the ground, which is up from about 30% during less stressed times. This is more or less a doubling of pumping of water, depending on whether or not total water use is increasing or decreasing. Many of the cities in the Central Valley rely completely on ground water. Water levels in the aquifers are dropping 100s of feet. There is a queue waiting to drill new wells.

The point of the National Geographic News article and the more complete Understanding California’s Groundwater from Stanford’s Water in the West Project is that ground water is out of sight and out of mind. Even worse, ground water is unregulated and quantitative information about drilling is private. This brings a problem that is related to climate and climate change back to policy, law and regulation- human agreements that are in conflict with coping with weather and climate stress.

I will conclude this entry by connecting some points I introduced at the beginning. First, the distribution of people and precipitation assures that for many in California the surface water from rivers and lakes is, like the ground water, out of sight and out of mind. When we commoditize a resource or anonymize people, we lose contact and context. This is perilous, and increases the barriers to taking substantive actions.

Second, the price of water in California is, presently, high. Those who have functioning wells are motivated by price to pump more. I can’t help but think of the carnivores finding the easy pickings of the herds collected around the drying water holes at what would become the Agate Fossil Beds. Then, from that, we humans are unique because of our ability to remember, to reason, to develop and to accumulate knowledge; we have the ability to make decisions that influence the future of our environment. We don’t have to be beardogs.

In the next entry, I will synthesize some of the recent scientific papers that have gotten a lot of attention. 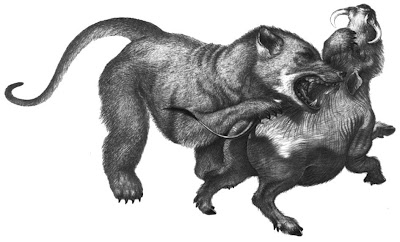